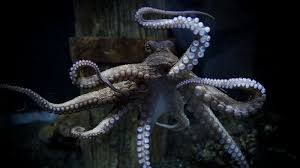 … since the 1960s, cephalopods numbers have been increasing. […] There had been anecdotal murmurs about such an upward trend before, but [Zoe] Doubleday’s data threw it into stark relief. The rise was obvious when the team analyzed data from both fisheries and other sources. It was there in both northern and southern hemispheres. It applied to species that stick to the same patch of ocean ocean floor, those that swim in the water layer just above the bottom, and those that patrol large stretches of open ocean. And it applied to every major group of cephalopod: For the most part, cuttlefish are doing well, squid are on the up, and octopuses are ascendant. […] “You wouldn’t have expected to see the same trend across these different groups,” says [Bronwyn] Gillanders. “It does potentially suggest that a large-scale, global phenomenon is affecting all of them.”

Breaking the seal on the Ccru's Black Atlantis dossier. https://t.co/45vpNu7JVo